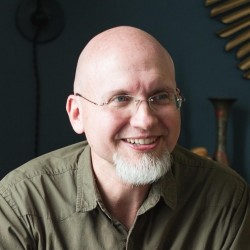 On November 16, Google released the VR version of Google Earth on the HTC Vive. Originally a web product, Google has rolled out Earth to a huge number of platforms, including all the major desktop operating systems, mobile platforms, and now their first version for a VR system.

If you haven’t seen it in one of its previous incarnations, Google Earth is a vast, internet-enabled globe. In all of its versions, you can drag around an entire virtual copy of our planet, zooming in to any point that interests you. The client stream portions of Google’s immense geospatial dataset to your device as needed in real-time, allowing you to dive into the Grand Canyon, see the Eiffel Tower jutting into the Paris sky, fly over the Rocky Mountain range, or swoop through the Manhattan skyline in a way the FAA would never approve in real life. Some versions of the software also allow you to layer over additional datasets, showing your city’s parks, current weather patterns, your last drive to grandma’s house, or the average temperatures around the world.Why It’s Special

So if there are already so many iterations of Google Earth, what makes the VR version worthwhile? The most salient characteristic is VR abiding strength: a sense of presence. Viewing our fragile “blue marble” from an astronaut’s-eye view is awe-inspiring. Hovering a dozen miles above the earth, looking down on a mountain range, is vertiginous. And wading through the buildings of a city makes one feel like a giant Japanese movie monster.

Google does a tremendous job of managing an enormous amount of data in a virtual space. The terrain geometry and rough textures are loaded before the scene fades up. As you look around, additional data is pulled down on demand, so as you look at a feature of your surroundings, it becomes more detailed. Some areas have better data than others — rural areas tend to be flat with satellite imagery, where urban areas have building geometry mapped with more detailed textures from aerial photographs. As I was exploring virtual Los Angeles, one particular building caught my eye. I zoomed in and bent down close to the floor until I could make out “Griffith Observatory” emblazoned across its entrance. Impressive. And the whole world is a continuous space — given enough time, you could move clear across the continent, seeing all the sights along the way in an uninterrupted stream.

The controls are well thought-out. If striding like a colossus through cities doesn’t already create enough of a sense of power, you can also drag the sun across the sky to simulate day/night cycles. (This doesn’t change the textures, so you don’t get city lights at night, but it still looks great.) You can move in several ways: pushing up or down on a control disc moves you forward and backward through the environment. By pointing at the environment and pulling the trigger, you can drag yourself through the world. And the other control disc allows you to change from an overhead map-style view to a horizontal, giant pedestrian perspective. And the menu buttons allow you to save certain locations and to choose among predefined or custom points of interest to visit around the world.

As with many VR experiences, motion sickness can be a concern. Google takes an interesting approach here: rather than relying on teleportation, the user moves continuously through the environment with the controls. While this would normally be a quick trigger for nausea, the Google engineers carefully narrow your field of view while in motion, leaving a small window you look through while your peripheral vision sees a subtle static grid that convinces your limbic system you’re not actually moving around. While I didn’t find it a perfect solution — I still felt slight queasy after experimenting with it for a while — it worked surprisingly well. The only transition that was especially vertiginous was when one transitioned from the overhead perspective to the horizontal view. (Those of you with stronger stomachs than mine will be glad to know that you can disable this effect.)

Google Earth VR is a remarkable achievement. Though the VR 1.0 version lacks search and many of the high-end data visualization capabilities that its desktop brethren provide, and Google has not yet added any multi-user capabilities, it is unparalleled as a world-exploration tool. Being able to move from one remarkable place to another around the globe with such fidelity, ease, and visceral presence is marvelous. After trying it, one of my coworkers said: “This is the VR experience I’ve been dreaming of since reading Snow Crash.” And Google will doubtless continue to add features and make the system even more capable over time.